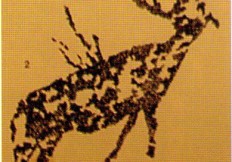 The macroschematic art of Pla de Petracos is declared a World Heritage Site by UNESCO, due to its great artistic and historical importance. It is the representation of the concerns and religiosity of the first farmers who occupied this land 8,000 years ago. If the cave of Altamira is the Sistine Chapel of Paleolithic art, Pla de Petracos is the Sistine Chapel of Neolithic art. The macroschematic Art has a very small geographical area, in the northern valleys of Alicante, which further increases their exclusivity. No doubt this is a must-see for any lover of prehistory that comes close to Alicante. 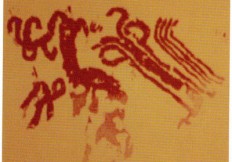 The Cave Paintings of Pla de Petracos are in the Barranco Malafí, a sparsely populated valley north of Alicante, in the Marina Alta region.

On the right, across the valley we see caves and rock shelters where there are prehistoric paintings . Crossing the valley and begin to ascent the shelters. We reach a crossroads, to the right is the Levantine art and to left the macroschematic art.

Reaching the Levantine art shelter you can see a deer about 7 cm. long, beautifully executed, it is naturally represented and You can appreciate the horns. You can see some liness from his back; surely they represent arrows, for which he would a wounded deer. Surely the panel would have more figures but today are lost. 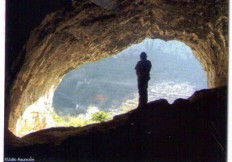 We arrive at the viewpoint of the huts with schematic rock art. It’s a shame that when enabled for visits to this archaeological site they didnt approach the fence to the art. We recommend bringing small binoculars to enjoy more this art. Although the distance the motif is clearly visible , thanks to the size of the representations and their excellent state of preservation [avoid the hours when the sun shines directly on the cove). We are in presence of a unique set, the best macroschematic representation of art that exists. There are a total of five panels of paintings. The central panel stand out, very expressive, with a figure of a meter high in praying position with arms raised and the head adorned with kind of small rays that suggest their relationship with the solar cult. Another panel, which is further to the right, suggests the importance of group and family for these communities. On the left are two other panels in an excellent state of preservation. In one of them seems to have a female representation and a bull. At the other side a winding figures have been identified as a symbolic stem that show the importance of the agricultural cycle for these early farmers.

And this art is the manifestation of the first farmers who arrived to the Iberian Peninsula eight millenniums ago. Sun, family, crops, livestock, four words that then had a sacred significance that led them to represent them symbolically in the cove sanctuary. We end in the big cave located next paintings. Due to its proximity, we must think in its use by those who did the paintings.

It could be used as housing, but also as the place where the sacred rituals or meetings that would undoubtedly have taken place in such an exceptional place. As a curiousity keep checking on the reddish hue of the hollow at back of the cave. 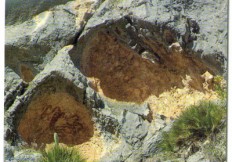 We know the relationship that the caves had in prehistory with the symbolism of the female sex and fertility. Could there have been ceremonies here to protect and improve the fertility of crops of these incipient farmers? They are assumptions leading to the imagination of those who visit this hidden valley, whose paintings make it a prime archaeological landmark in the peninsular prehistory.